After a bit of motivation I finished off the remaining 6mm modern Arab vehicles I own (until I order more from Scotia).

This batch consisted of T-72s, AMX-GCTs, OT-64s, BTR40s, a UAZ469, BTR-50 engineering vehicle  and BTR152s. These were a struggle especially the OT64s as the details were a bit soft on top of the models and the washes didn’t pick up what was there. One of the barrels on a T72 broke so I will drill that out and replace it with brass rod and a greenstuff muzzle baffle.

I thought this was everything finished but then I discovered 2 more 85mm guns, 2 GAZ69 with RCL and 3 AML90s! I’ll probably wait until my Scotia stuff turns up before I start on those. 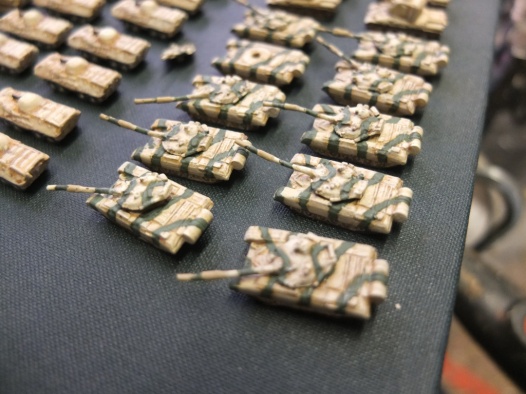 I should really paint the aircraft next as I have Mig23, Mirage F1s and Su-7 for the Iraqis and I want to get some Mig21s.

The next project I have planned is some 1940 Brits to use as opponents for the 1940 Germans I finished a month or so back so I can play some games. Also I caught up with a couple of friends who were played Epic and that has inspired me to start on my Imperial Guard (Adeptus Militaris now days). I have a bunch of 3D printed models and some stunning Vanguard vehicles and Infantry which I think are Death Krieg proxies.